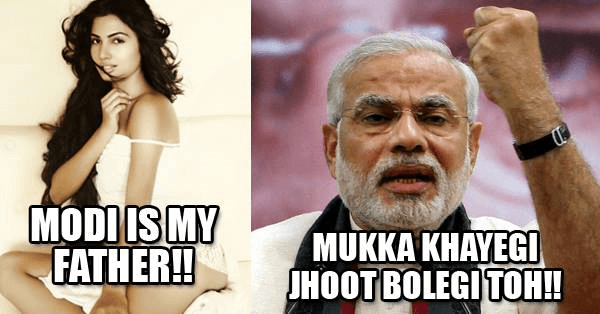 I Am The Daughter Of Narendra Modi, Says Model Avani Modi!!!

13.7 K shares
CelebrityEntertainmentFeaturedNewsViral
Upcoming movie "Calendar Girls" Star cast hot and sizzling Avani Modi will be soon entering in Bollywood. In an exclusive interview given to NavBharat Times, Avni Modi said "I am Prime Minister Narendra Modi Daughter". Well, before reacting further in this connection, read below because she did not say it in that sense which you might have thought. Asked frequently by everyone, if she is related to Narendra Modi as they have their surname "MODI" in common and belongs to same state. She replied "I am Prime Minister Narendra Modi Daughter. Not just for Gujarati girls but for all the daughters in this nation, Narendra Modi is like a father figure." The movie "Calendar Girls" is slated to hit the big screens on 25 September 2015.
Thanks for rating this! Now tell the world how you feel - Share this on Twitter and on Facebook.
(Nah, it's cool; just take me back.)
What's Your Reaction?
Author: Abhishek

Make in India: Government Is Launching Its Own Operating System Replacing Microsoft Windows »