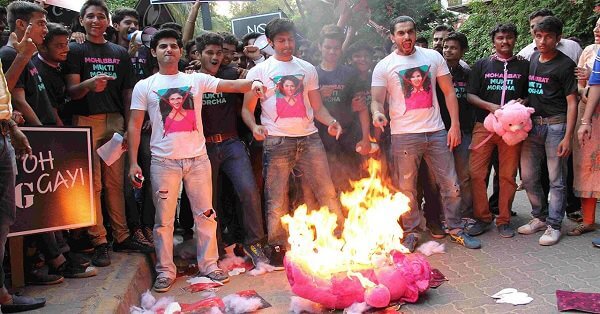 Star cast of 'Pyaar Ka Punchnama 2' including the director and the producer protest against girlfriend In Mumbai. What will happen if the reason of protest is love? No we are not talking about any protest against some social evils we are talking about the protest by guys against the girls. ‘Mohabbat Mukti Morcha’ protested against girls for taking away life from boys. Yeah! Sounds fun isn’t it guys? With great success of Pyaar Ka Punchnama the makers are ready to release the sequel ‘Pyar Ka Punchnama – 2.’ Watch the video and find out what the agenda of ‘Mohabbat Mukti Morcha’
Thanks for rating this! Now tell the world how you feel - Share this on Twitter and on Facebook.
(Nah, it's cool; just take me back.)
What's Your Reaction?
Author: Abhishek

« Alia Bhatt and Shahid Kapoor’s “GANDI BAAT”. A Kela in a NIGHT