7.9 K shares
FactsFeaturedNewsReality dose
It seems that Google loves Indian Prime Minister Narendra Modi a lot and that’s why it displays his pic at just any place. Previously, we have seen two such instances. On one, Modi was listed under the category of Top 10 Criminals, whereas on the other, he was categorized as the Most Stupid Prime Minister. Now at this time, the result of India’s First Prime Minister with the pic of Narendra Modi. The actual DOB of Jawahar Lal Nehru is November 14, 1889 and thus, if he were alive, he would have been more than 125 years old. If you type India’s First Prime Minister in Google, you’ll get the following result: 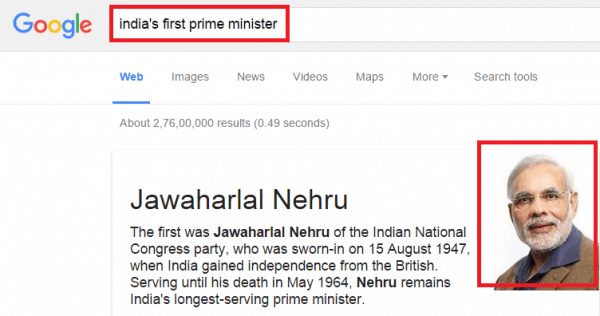 « Watch! Yashraj Is Back With A Wedding Web Series ‘Bang Baaja Baaraat’

Indian Girls are exposed! Find out here about our lies! Do you lie? »