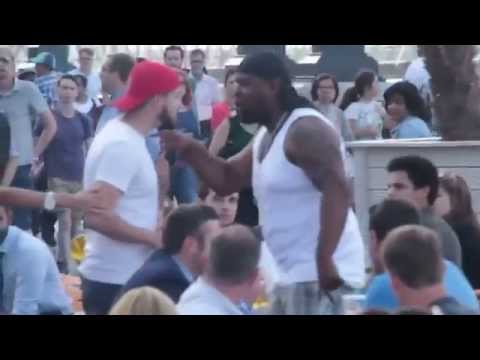 This big man at some outdoor dining place learned this the hard way when he allegedly dropped offending words to or about an attractive blonde, who happened to be with her husband. The offended husband confronted the man, who appeared to be quite proud of what he did. The wife tried to intervene and stop her husband from taking it further, saying the whole things not worth it. The husband was having none of it and when the defiant man refused to back down and instead emphasized that he was indeed talking about the wife, the husband grabbed a bottle and showed the bully what happens to men who talk sh*t about another man's wife. What if you are trying to mind your own business with your girl and someone walks up and passes some comments on your girl, then what will you do especially when he makes it clear that it is directed on your girl? Here is a video of a guy who was harassed in a similar way look what he does next.
Thanks for rating this! Now tell the world how you feel - Share this on Twitter and on Facebook.
(Nah, it's cool; just take me back.)
What's Your Reaction?
Author: Abhishek

Watch! This Video Will Change Your Whole Perspective Towards Arranged Marriages »